How do citizens across the different regions identify with the EU?

Macron and Europe, what about Regional funds?

EU Cohesion Policy, supporting a variety of projects that support regional economic development and contribute to betterment of quality of life, can be considered as a tool that is contributing to the development of a ‘sense of community’ among the EU citizens and shaping the perceptions of the EU.

By investing funding into concrete projects across the European territory the policy is not only a direct and tangible expression of European solidarity, but also the EU’s activity that probably has the most direct impact on people’s daily lives and their environment. Whether and how exactly EU Cohesion Policy actually affects what people think about the EU remains unclear, particularly at the regional level where the policy has the most direct and palpable effects. The COHESIFY project addresses this knowledge gap by investigating how EU identification varies across the differentiated regional contexts of the 28 EU member states.

Identification with the EU can be considered as having two components – an affective component, concerning sentiments and attachment, and a more utilitarian component, concerning the views on what the EU actually does. Drawing on this distinction and the available Eurobarometer surveys, we established an EU identification index compiling survey responses on attachment to EU and image of the EU. We then established a territorial typology of EU identification to explore how it varies across the various European regions. We identified five types of clusters of regions: EU Identification types 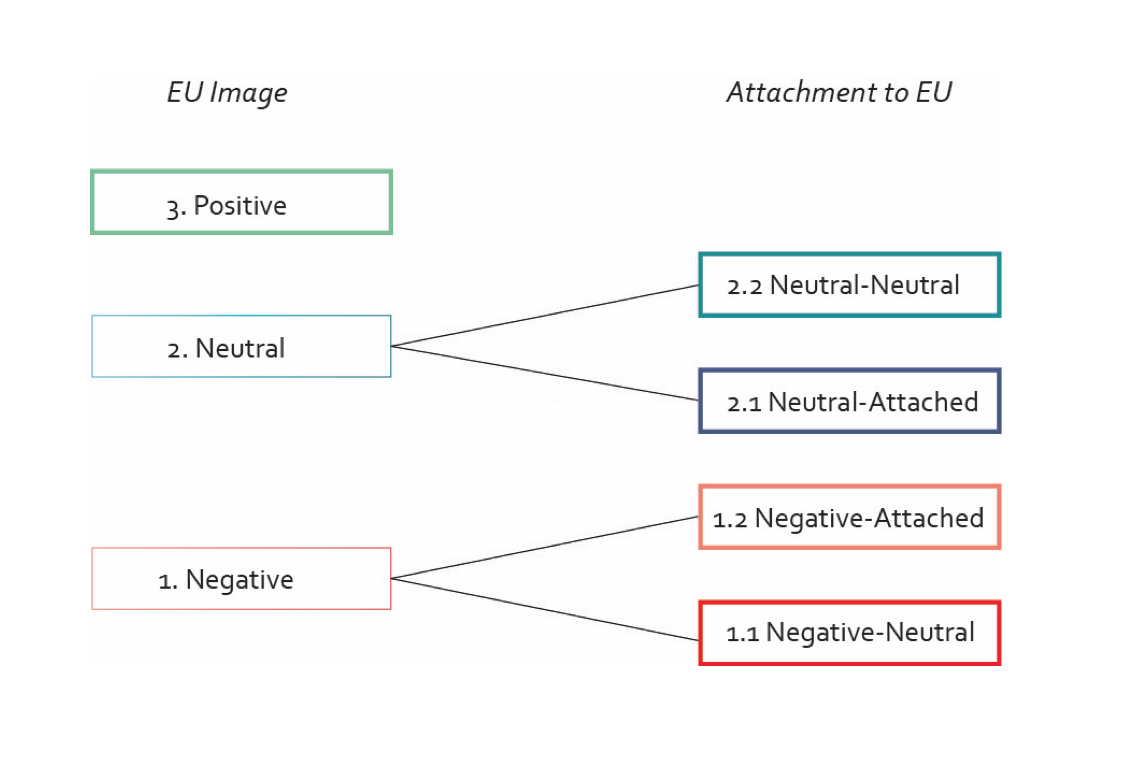 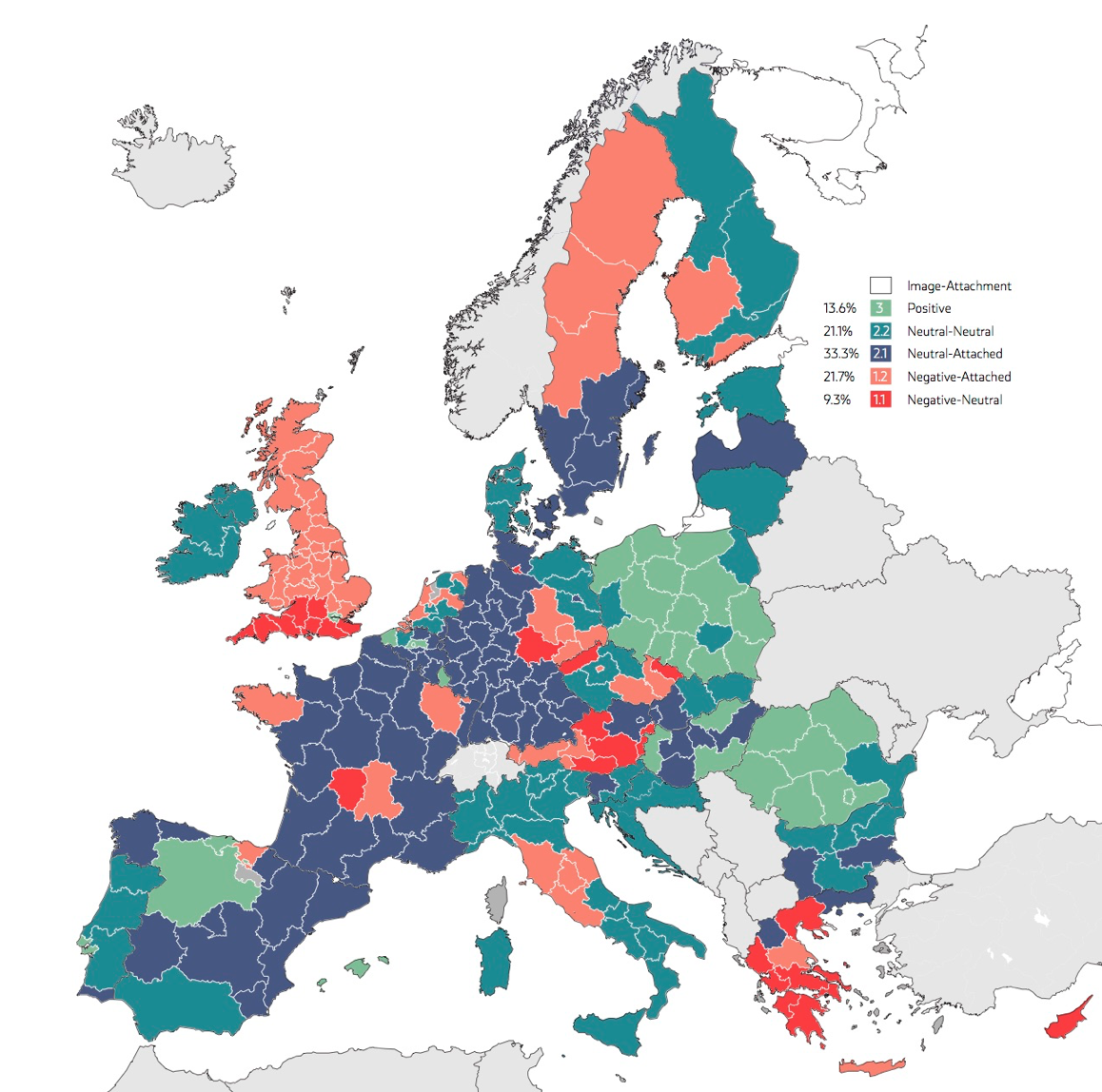 The typology and the map that was produced on its basis offer valuable insights on the regional differentiation of EU identification.
First and foremost, perceptions of what the EU does do not go hand in hand with lack of attachment to the EU – there are no regions with predominantly negative image of the EU and no attachment to EU. Thus, citizens tend to be attached to or at least neutral towards the EU even if they disapprove of what it does. In other words, the affective aspects of EU identification are more deeply rooted and stronger, than the utilitarian aspects. Interestingly, in the vast majority of regions with a predominantly negative image of the EU, the citizens tend to be attached to the EU (there are twice as many Negative – Attached type regions than Negative – Neutral). From the observation of the map, no clear North-South differentiation patterns emerge, even if one could perhaps expect them given the socio-economic determinants of EU identification and the impacts of the post-2008 crisis that affected more severly the Southern states. In fact, Negative-Neutral type, while scarce generally, can be found both in the UK, unsurprisingly, but also the German Land of Thüringen, Austria’s Kärnten or the French Limousin and Cyprus, not to mention the case of Greece where many regions fall into this category. Likewise, the Negative – Attached type of regions can be found across Europe, from Spain, Italy and Greece, to Czech Republic, Germany, Austria, and the UK and the Nordic countries. While this would require further analysis, the map also seems to indicate something interesting about the role of EU funding for EU identification. Neutral-Attached and Neutral-Neutral types tend to cluster in the relatively rich central regions of the EU, from The Netherlands, through Germany and France to Norhtern Italy, that do not see a considerable inflow of EU funding, but interestingly, also in the regions that prior to the big-band Eastward enlargement of the EU were the main recipients of Cohesion Policy support (Ireland, Portugal, Spain, Southern Italy, with the exception of Greece), but now have seen this source of funding for regional development dry out. By contrast, Positive type regions cluster in some of the Eastern member states that currently benefit from a huge inflow of EU funding, such as Poland or Romania. That being said, many of the regions that have benefited from more substantial support from EU Cohesion policy, being qualified under Convergence or Phasing-out objectives in 2007-2013, and thus have had a greater exposure to its impacts, are not necessarily characterised by more positive EU identification. In countries like the Czech Republic, especially, there is a greater diversity of types, with some regions like Severozápad, bordering Germany, and Moravskoslezsko bordering Poland and Slovakia, being characterised by the most negative EU identification (Negative – Neutral), and the rest of the regions splitting between Neutral – Neutral type, where predominantly the image of the EU is neither good nor bad and people tend to be lukewarm in terms of attachment to the EU, and Negative – Positive type, where negative views on the EU prevail, but citizens nonetheless tend to be attached to the European integration project. In other parts of Europe where substantial EU funding was allocated, there is a great diversity of EU identification types, for instance in Spain one can find one case of a Positive type but not among the major beneficiaries of EU funding, citizens maintain more neutral image of the EU. In Ireland, often given as an example of effective use of EU funding to promote regional development, in both regions citizens predominantly report having neutral image of the EU and remain neutral in terms of attachment to it. The example of Greece is also interesting, as even though the country has been a long-time beneficiary of substantial allocations of EU funding, there are six regions with predominantly negative image of the EU. This could be related to the fallout of austerity measures imposed upon Greece by the so-called Trojka in the context of EU sovereign debt crisis. All this may indicate that whether a region has been a significant beneficiary of EU funding hardly matters for its citizens’ EU identification, which in turn suggests that other factors, for instance socio-economic ones, may be more important. One is also struck by the fact that many of the border regions are not necessarily particularly positive about or attached to the EU, as one could expect experience of interaction with neighbours across the border could strengthen EU identification. In fact, many of the border regions, such as the Greek, Czech or Austrian ones are in the Negative – Neutral category. Finally, there is the elephant in the room – the United Kingdom - whose citizens sent a strong anti-EU message by deciding to leave the EU in the 2016 referendum, with the predominance of negative image of the EU. Even there, however, there is strong differentiation on attachment to the EU and the solitary case of London is striking as the only region in the Positive category. The above observations open up exciting avenues for further investigation that will allow for shedding light on what actually determines those patterns of EU identification across the European territory. What is actually the role of EU Cohesion Policy in this? Is it relevant or perhaps are other territorial, socio-economic or institutional factors at play? In our ongoing research as part of the COHESIFY project we expect to solve this puzzle. The research paper can be found here.